March 12, 2017
Next step in empennage preparation was prepping the metal for priming, and then priming.

I am electing to follow the recommendation from the factory to prime only mating surfaces. This is much easier than having to deal with fully spraying all the parts, which is a much more involved process I don't feel is entirely warranted for 6061-T6 aluminum, which is already quite corrosion resistant. Priming mating surfaces is also what Zenith aircraft recommends, on the same aluminum alloy, for corrosion protection, as can be seen in this EAA video.


Here is the "gear" needed: 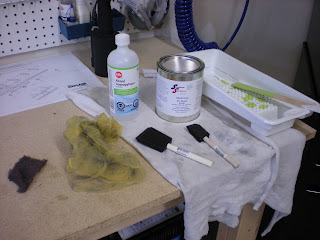 And here is the final result: 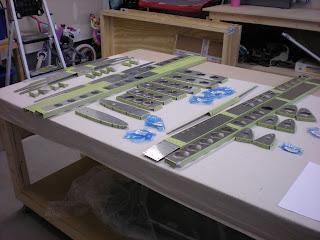 Only slight issue is that in the end, there is some primer that ends up visible on the outside of the airframe ... the rear main spar of the horizontal stabiliser for instance, has hinges for the elevator, so this faces "outwards".

The primer can be removed with a number of solvents, as per Stewart Systems instructions, so I'll consider cleaning things up that way and let you know how I make out!