June 30, 2019
After putting the torque tube work aside, I moved forward and took care of the floor, center console and pedals: 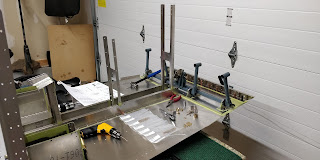 Not much to report here. One of the pedals had incorrectly sized holes, so I ordered a new one.

Also the plans are not clear on the part number for the firewall floor attachment bracket :

Turns out this part was in my inventory under a part number not listed on the plans: CF-BKT-029!

Also, the center console skins can go in with M3 hardware, which is what I have, even though the plans cal for M4. Apparently a change that was done at some point and never communicated.